WE BELIEVE THAT EVERY PET 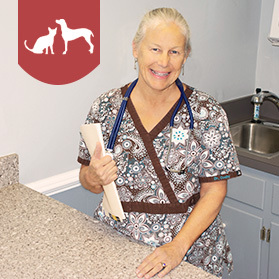 Brenda Cosby was always drawn to animals as a child, watching and helping at the veterinary office in Petersburg where her grandmother was office manager. In the 1960’s though, the thought that a girl could ever become a veterinarian was simply a dream.

Upon graduating with a journalism degree from VCU, Brenda married her college crush, Bill Cosby, and moved to Atlanta to take the publishing world by storm. When it became clear that her writing talents weren’t going to make her America’s next great author, she went back to her first love, animals.

It took another three years of remedial physics, organic chemistry, and animal science classes to convince The University of Georgia to accept her. By then, she and her husband had one-year-old Katie in tow. Late night study sessions and colicky babies didn’t easily mix, and she thanks Bill for most of that early parenting.

Graduating from the University of Georgia in 1983, Brenda spent most of her senior year pregnant with son Will, who was kind enough to arrive three weeks late, after her final clinics. She also thanks Doctors Crawford and Anthony for their bravery as they hired her when she was seven months pregnant. She’s been at Stonehenge Veterinary Hospital from that moment, loving it ever since.

In her spare time, Dr. Cosby cooks, gardens, and tries to work out enough to ski in Utah one week a year. Daughter Kate and son Will now have babies of their own, so the Cosby’s are proud grandparents. Slideshow always available by request!

"We recently had to put our beloved pug down and I can not express how thankful we were to the staff at stonehenge. They were supportive and helpful during a very difficult time in our lives. They have been our vet for 14 years and we hope to use them again soon!!"

"My family has been a loyal customer for over 20 years. The doctors are the best. They really care about the animals and their parents."

"I was able to get a last minute appointment for my pug. He caught kennel cough on thanksgiving day. They were completely booked but I told them that he was coughing a lot and they worked him in that day. He ended up needing several medicines but I'm so thankful they saw him. Thanks Stonehenge!!"

"Princess was seen today for a nail trim and rabies but ended up getting the works! She was so well taken care of. I have never seen a cat so calm at a vet's office. The vet was so good at explaining things to us so we could understand and she did a great job making Princess feel comfortable and safe. Highly recommend!"

"Great Vets and staff. I've brought all my pets here for last 12 years."

"We thought we were going to have to say goodbye to our Sadie Lady (cat) but they were able to help her and didn't make us poor at the same time. I really felt like they were there for Sadie and not my money. So very grateful."

"Our heartfelt thanks go out to Dr. Cosby for her genuine caring and loving of animals. The entire staff are friendly, caring & wonderful with the 'children' we take in! We will continue now with our little boy Gabe, also a Shih Tzu, with the knowledge that he will receive the best care available in the state."